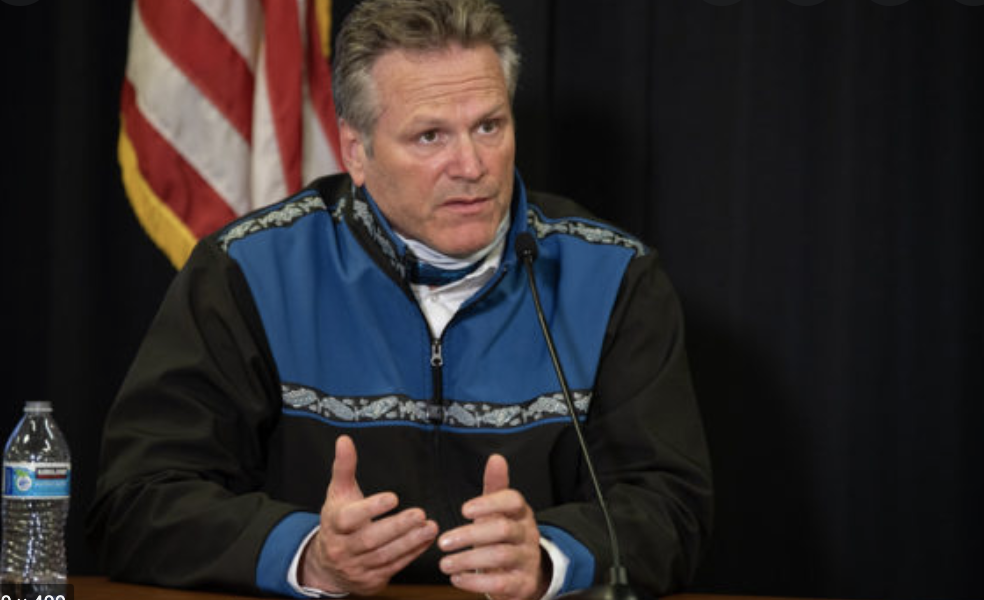 Since he officially began his reelection campaign last August, Gov. Mike Dunleavy has spent nothing on personnel for his campaign.

He’s paid for food, processing fees for fundraising, office supplies, postage and travel, but nothing on any campaign staff from August until the end of January.

One way he has managed this is by using state resources for campaign purposes.

For instance, his campaign spokesman, Andrew Jensen, is a state communications employee in Dunleavy’s office.

Jensen’s state job is to sing the praises of Dunleavy and attack Dunleavy’s critics.

He is also a “volunteer” in a campaign job in which he sings the praises of Dunleavy and attacks Dunleavy’s critics.

It is impossible to say where his state job ends and his campaign job begins because they are the same.

This is a clear abuse of state resources by Dunleavy. Jensen should be removed from the state payroll.

Alaska news organizations have taken to quoting Jensen as a campaign spokesman, without mentioning that he is a state PR man in Dunleavy’s office who is paid to promote the governor. Jensen is the former editor of the Alaska Journal of Commerce.

When I first mentioned the Jensen conflict of interest on Twitter late last year, Jensen  responded that I didn’t understand that he has a right to hold a state job and to work on Dunleavy’s campaign.

“Alaska’s Professor of Journalism weighs in with his grasp of the First Amendment,” Jensen complained.

“If you want to keep your Alaska Journalism Emeritus status it is a bad idea to announce that you were today years old when you discovered politics,” said Jensen.

Austin Baird, who is handling communications for former Gov. Bill Walker’s campaign, is a former state employee who exchanged barbed comments with Jensen on Twitter after campaign finance disclosure reports were posted this week.

Jensen boasted that Dunleavy has more small donors than Walker and said, “Keep chasing that big money and we’ll keep working for Alaskans.”

In a broader sense, Dunleavy has paid little attention to the state law that prohibits the use of “state funds, facilities, equipment, services or another government asset or resource for partisan political purposes.”

In recent months he has turned up the output of his state-funded PR office with new podcasts, additional PR employees, a barrage of social media posts, announcements of the sort that he never made before, managed press appearances with no followup questions, campaign appearances disguised as official business and state-funded advertising.

When you use state resources to promote yourself this way, you can save a lot of campaign money.

The Legislature hasn’t done a thing about this and Alaska news organizations have failed to report on Dunleavy’s continual use of state funds and resources to promote his campaign.

In 2020, he settled a complaint about violating the ethics act with a $2,800 settlement that excused his misuse of state resources.

He spent $35,000 in state funds to support some legislators, oppose others and try to get the public to pressure legislators. Most of that was fine, according to the settlement.

This was a convenient whitewash by Dunleavy and John Tiemessen, the former attorney for former U.S. Senate candidate Joe Miller, hired by the state personnel board as an independent counsel to handle the ethics charges against Dunleavy.

State money Dunleavy spent on partisan communications directed at lawmakers and to help his own political goals doesn’t count as partisan, according to Tiemessen, because  legislators had not filed paperwork saying they planned to run for re-election a year-and-a-half later.

Under Tiemessen’s faulty logic, it is possible to use public money in any amount to target or support legislators who have not declared plans to run again.

The law says that partisan “means having the intent to differentially benefit or harm a candidate or potential candidate for elective office.”

“I never intended for state resources to support a partisan political purpose,” Dunleavy said in a statement at the time, adding that his staff would undergo “the appropriate ethics training.”

There are plenty of signs that he is still using state resources for inappropriate partisan political purposes.

In July, Dunleavy hired back his 2018 campaign manager, Brett Huber, and created a brand-new $140,000-a-year job titled “Governor’s Senior Policy Advisor for Statehood Defense,” a way of bulking up the bureaucracy to promote the anti-fed theme of his campaign.

Huber is one of the state employees who serves as a co-treasurer of the 2022 campaign.

Dunleavy has been spending lots of state money to attack legislators, promote his ideas about the Permanent Fund and sell his campaign theme of bigger dividends.

Dunleavy doled out $250,000 of state ad money on Aug. 24 to Mike Porcaro, the Anchorage right-wing radio voice and ad man who backs Dunleavy.

Since early 2020, Dunleavy has been sending $4,000 month to Mary Vought, a media consultant in Virginia polishes his image and  helps get him on TV. The $48,000 annual payments started not long after Vought attached her name to a letter opposing the recall. No one has ever explained why the state should be paying for her PR services.

In September, he hired two new state PR people to get him more publicity in Alaska.. He went to Soldotna to hold a fundraiser one day and held a cabinet meeting there the next. He had nearly every member of his cabinet agree to be a co-host for an Anchorage fundraiser.

He began a new podcast in August and a second new podcast Oct. 4 about the achievements of the Dunleavy administration.

Much of this is work that should be paid for by the Dunleavy campaign, not by the state.

Your contributions help support independent analysis and political commentary by Alaska reporter and author Dermot Cole. Thank you for reading and for your support. Either click here to use PayPal or send checks to: Dermot Cole, Box 10673, Fairbanks, AK 99710-0673.