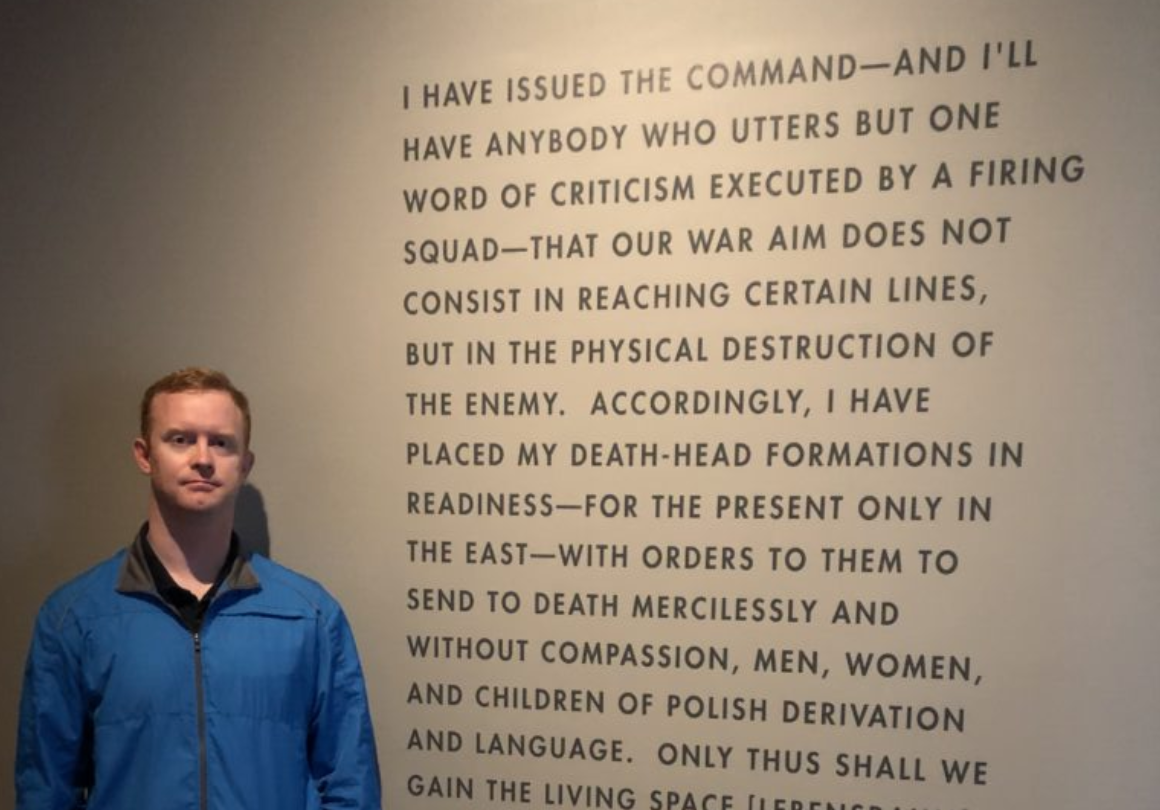 Rep. David Eastman poses next to a quote from Hitler in the Holocaust Museum in Washington, D.C.

I don’t understand exactly why Rep. David Eastman would use a photo of himself at the Holocaust Museum to bolster his crackpot claim that President Joe Biden saying “our patience is wearing thin,” about people refusing to get vaccinated, puts Biden in a league with Hitler.

In September, the Anchorage Daily News published an accurate story saying Eastman had compared Biden’s language to that of Hitler. Eastman linked to a website that denies the Holocaust.

“The comparison was so displeasing to the left that I was labeled a Nazi just for observing the connection,” Eastman wrote on his website in October.

Eastman, a career government employee, is a propaganda practitioner who invented this Biden-Hitler connection.

He portrayed this nonsense as a noble effort, saying  “There are some who would relegate the Holocaust to history, and argue that no parallels can ever be drawn to current events.”

The incident is a good display of Eastman’s warped thinking and his coded language.

If you haven’t done so already, I suggest that you read a column published by the Midnight
Sun blog about Eastman’s use of language and code words.

The column is by Virginia attorney Edward ReBrook IV, who was a classmate of Eastman’s at West Point.

ReBrook, a Purple Heart recipient who served in Iraq, says that Eastman tried to recruit him to join the John Birch Society when they were at West Point.

In recent years, ReBrook has had a lot of exposure to white supremacists as a defense attorney. He said the two years he spent representing radicals helped him understand the “rhetoric, coded language and strange obsessions of the far right,” all of which he sees in Eastman.

“Neo-fascists and white supremacists survive by hiding their most extreme views from normal people, whom they call ‘normies’“, he said.

As an example, he quotes the exchange in which reporter James Brooks of the Anchorage Daily News asked Eastman if he is a Holocaust denier. Eastman replied, “No, there’s nothing to deny.”

“This is a masterpiece of coded language and verbal gymnastics. A normie might conclude that David is saying, ‘No, I don’t deny the Holocaust.’ But to his fellow neo-fascists, ‘There’s nothing to deny’ means that he either believes the Holocaust didn’t happen, or that he finds it politically useful to promote revisionist history. Only a Holocaust denier who doesn’t want to be publicly identified as such would respond this way.”

“He is a highly skilled rhetorician and a master of communicating in coded language. He knows exactly what he is doing: creating just enough deniability to evade being labelled a racist and Holocaust denier without denouncing either plainly enough to disappoint his fellow neo-fascists. In other words, he hides in a place that shields him from scandal while augmenting the danger he presents to our Republic – in plain sight.”

He mentions this about Eastman parking himself next to the Hitler quote in the museum and posing for pictures.

“Look at the photo he posted for the occasion. To a normie, it appears that David is frowning in disapproval at the monstrousness of The Führer’s words – at worst, it might look like he’s a politician trying to score a tacky photo op at one of America’s most somber memorial spaces. But to his fellow neo-fascists, he is standing at attention and paying respectful homage to Hitler. Normal people don’t take selfies in front of Hitler quotes,” ReBrook wrote.

Your contributions help support independent analysis and political commentary by Alaska reporter and author Dermot Cole. Thank you for reading and for your support. Either click here to use PayPal or send checks to: Dermot Cole, Box 10673, Fairbanks, AK 99710-0673