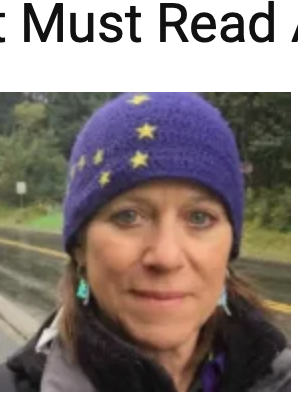 Earlier this month, Florida-based Suzanne Downing published a story on her website Must Read Alaska titled, “Assembly Chair LaFrance cusses out employee of municipality.” For those of us who have been watching Suzanne LaFrance chair the Assembly for the last year, that headline seemed far fetched. LaFrance does not present herself as someone with an out-of-control temper. And as you’re about to hear, the story is, indeed, not true.

Allow me to describe the article as it appeared on her website and her podcast of the same name: Downing paints a picture of an Assembly intent on not offering new police Chief Michael Kerle the equivalent swearing-in ceremony that had been given to former Chief Ken McCoy last year. She implies that this alleged slight may be because Chief Kerle is white, while McCoy is Black. And because of this, a separate swearing-in was held at APD headquarters the day after the Feb 1 assembly meeting. At the APD ceremony, Mayor Dave Bronson apologized to Chief Kerle for the Assembly’s apparent purposeful snub.

Learning of the mayor’s words enraged LaFrance so much, according to Downing, that she “cussed out” the new Chief of Staff Alexis Johnson.

This is not what happened.

Anchorage Assembly Chair Suzanne LaFrance, contacted by phone yesterday, explained that on Jan. 31, the day prior to last week’s assembly meeting, City Manager Amy Demboski confirmed with her that neither Chief Kerle nor Cheryl Frasca, the new director of the office of management and budget, would be sworn in at the Assembly meeting. This happened at a leadership meeting where members of the mayoral administration and the Assembly leadership sit down to iron out expectations for the next day’s Assembly meeting. LaFrance was led to believe that Chief Kerle wanted a private ceremony on his upcoming birthday (which would have been the day after).

At Tuesday’s Assembly meeting, Michael Kerle’s confirmation as Chief of Police passed on the consent agenda without any Assembly member pulling the item for special recognition, but anyone could have pulled it, including conservative assembly members Jamie Allard or Crystal Kennedy, or the mayor or city manager themselves.

LaFrance pointed out that the administration has her phone number and can call or text her at any time, even during the meeting. Also, they have microphones at their seats on the dais and could have called a point of information and asked Chief Kerle to speak. But none of that happened.

The day after that meeting, a swearing-in ceremony was performed for Chief Kerle at APD headquarters but no one from the Assembly knew about it because they had not been invited. During that ceremony the mayor did indeed apologize to Chief Kerle for the Assembly not holding the swearing-in themselves the night before.

Upon learning this, LaFrance wanted to confirm the facts. She sought out the mayor’s new chief of staff, Alexis Johnson, in person because Johnson had stated her intention to be a bridge-builder when she recently took that position. Although she was angry – the mayor had just told the entire police department that LaFrance lacked the decency to properly recognize Chief Kerle -- LaFrance insisted that she remained professional.  She and Johnson spoke in private, and LaFrance asked Johnson if she could confirm that the mayor had said she lacked the decency to recognize Chief Kerle. Johnson confirmed it, and LaFrance replied something to the effect of: “Are you fucking kidding me?” Johnson was surprised to learn that none of the Assembly had been invited to the APD swearing in ceremony and admitted that was an oversight. She promised to bring these issues up with the administration later that day. LaFrance and Johnson then rode the elevator together and engaged in friendly conversation. This is hardly the “cussing out” described in Downing’s headline.

Johnson emailed LaFrance later that same day – I have a copy of this email – which states that there had been a few missteps in communication regarding Chief Kerle’s confirmation, and that the administration’s impression, as well as APD’s, had been that the incoming Chief should have been given the opportunity to speak at the assembly meeting. She apologized for that information not being communicated.

LaFrance emailed back that there had been multiple opportunities for the administration to communicate with her, both before and during the meeting, but thanked Johnson for getting back to her and for her bridge-building work. I have a copy of that email as well.

LaFrance assures me that she and Chief Kerle have an amicable relationship that has not been adversely affected by these events. I reached out to the Anchorage Police Department and received the following response via email from Gia Currier, executive assistant to the chief on his behalf, and I quote:

“The swearing-in ceremony was scheduled to take place at the APD Headquarters after the confirmation hearing and was not intended to happen at the Assembly Chambers. Chief Kerle expresses his gratitude for the Assembly’s unanimous vote on his confirmation.”

I tried to contact Chief of Staff Alexis Johnson for comment but have not yet heard back.

Even though I am not a professional journalist, I did try to get additional sources for this story. Downing made no such attempts to speak with LaFrance before publishing her slanderous description of the Assembly Chair’s behavior. Downing followed the propagandist’s playbook – sprinkle a kernel of truth here and there to increase the likelihood that people will believe the lies that follow.

The mayor did apologize for the assembly not holding a swearing in for Chief Kerle, but Amy Demboski had confirmed with the chair the day before that the new chief did not want an assembly floor confirmation. LaFrance did utter a curse word, but it had not been directed toward a person and the woman who heard it took no offense and maintains a relationship with Chair LaFrance.

Combatting falsehoods like Downing’s needs to happen. We cannot allow truth to go undefended, but this fight is labor intensive. The time spent debunking Downing’s inaccurate version of events could be better spent doing the hard work of improving Anchorage. Do not fall for the false narratives of Must Read Alaska.