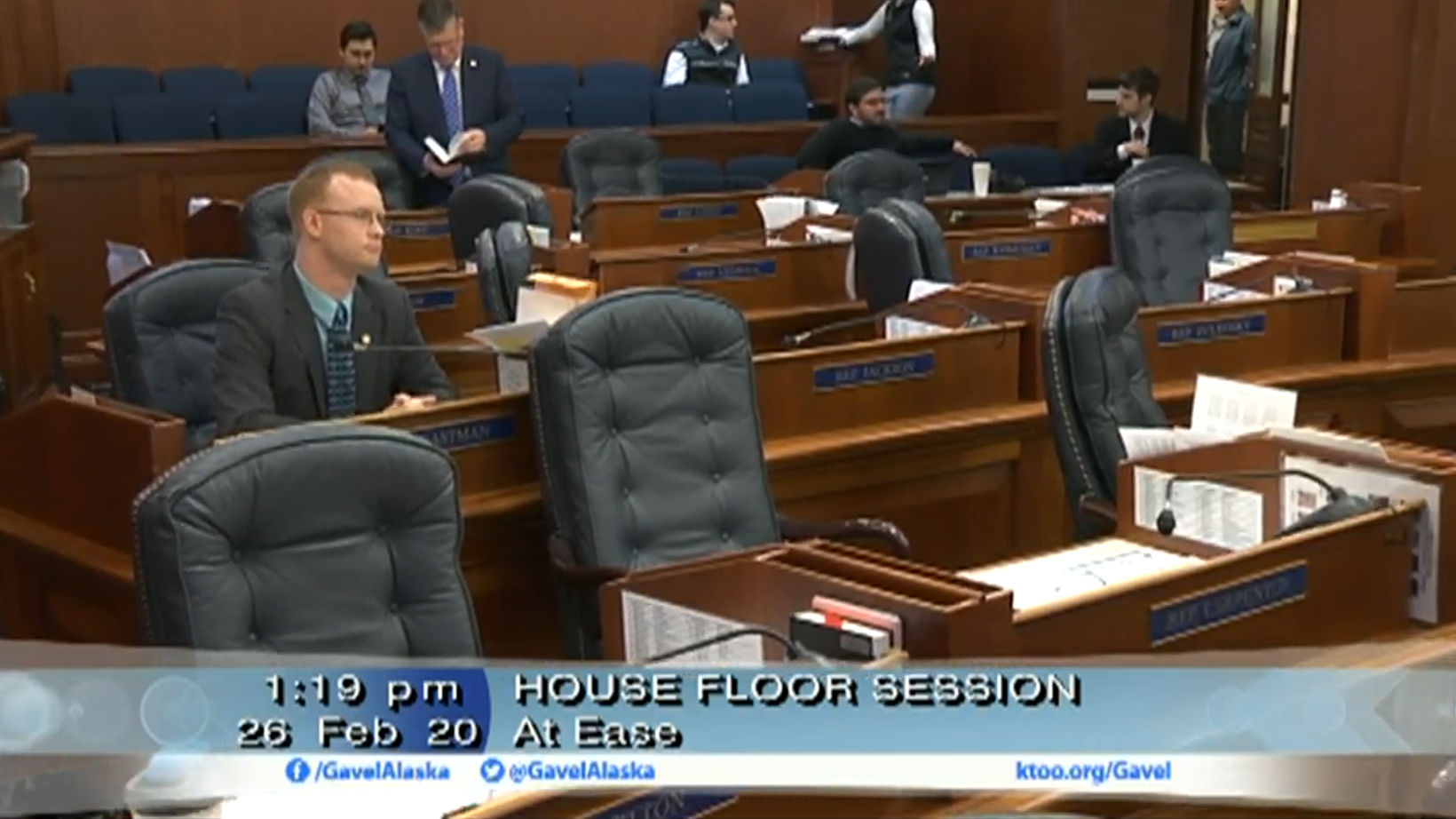 Booted from a huddle with his own caucus, Rep. David Eastman, R-Wasilla, waits alone on the House floor on Feb. 26, 2020. (Screenshot from G

The bipartisan House Majority took aim at Rep. David Eastman today over his membership in the Oath Keepers militia group by advancing a plan to remove him from his committee assignments, but the vote was postponed to Wednesday.

The action comes amid pressure for the Legislature to take some kind of action against the extreme-right Eastman after the leader and several other members of the Oath Keepers were indicted on seditious conspiracy for their involvement in the Jan. 6 insurrection (Eastman attended the rally but there’s no evidence that he entered the U.S. Capitol). Many are pointing to Article XII, Section 4 of the Alaska Constitution:

No person who advocates, or who aids or belongs to any party or organization or association which advocates, the overthrow by force or violence of the government of the United States or of the State shall be qualified to hold any public office of trust or profit under this constitution.

Removing him from the Legislature altogether appears unlikely given it would take 27 votes, which would require fellow minority Republicans to support his removal. Instead, removing him from committees would take a 21-member majority, which wouldn’t be the first time that Eastman has seen his assignments taken away. Eastman lost his assignments in 2020 at the request of his fellow Republicans.

Eastman has long been a thorn in the side of Republicans because of his extreme politics and tendency to direct outrage at fellow Republicans, turning off enough moderates to dash the hopes of a Republican majority for two legislative cycles now. Several Anchorage Republicans made the trek out to Wasilla to campaign for his primary opponent Jesse Sumner in 2020. The extreme-right Alaska Family Action even went after Eastman that year, arguing “it is clear he isn’t an effective policy maker and legislator. … Rep. Eastman excels at talking in a way that draws attention to himself, but he utterly fails at moving forward conservative policies.” And that’s not to mention being censured for suggesting women—particularly those living in villages—happily got pregnant so they could travel to get abortions as well as several other votes against recognizing Alaska Natives and Black Alaskans.

While a second removal from committees seems like it ought to be clear cut, the situation seems to have devolved into anything but clear.

That appears chiefly because Eastman has said the magic words: “Cancel Culture.”

Eastman—who had previously called himself a proud member of the organization—now argues that his connection to the Oath Keepers is “a slight one, having applied for membership more than a dozen years ago and never attended a meeting” in a social media post over the weekend. The post reframed the entire thing into terms that his Republican colleagues appear to understand with a litany of right-wing trigger words like “Cancel Culture wolves” and “Critical Race Theory” along with a dollop of election conspiracies and border fears.

Several far-right Republicans have since stood up in defense of Eastman, with Anchorage Republican Rep. Laddie Shaw telling the Anchorage Daily News that “I don’t have 100% certainty that he committed any wrongdoing.” He cited the group’s bylaws—which say “We will not make war against our own people. We will not commit treason.”—as proof that everything’s fine.

And as if to put a fine point on how the whole thing has quickly gone sideways, Eastman managed to outmaneuver the House Majority Coalition altogether with an objection to how the vote was being approached. He pointed out, apparently correctly, that removing him from the Ethics Committee requires a 27-member majority vote.

That sent the House into a lengthy break to discuss, during which questions started to arise whether the House Coalition had actually wrangled the 21 votes necessary to remove him from the committees in the first place. It’s not clear they do.

That led the motion to remove Eastman from his committees to be tabled, keeping Eastman on the Rules, Judiciary, State Affairs and Ways and Means committees for now. Majority Leader Rep. Chris Tuck followed up with a floor speech that argued the First Amendment has its limits, namely that you shouldn’t overthrow the government.

I’m told that the House Majority will give it another go. They’ll convene another meeting of the Committee on Committees to properly produce the two reports and then advance them to the floor for a vote on Wednesday.

Why it matters: Frankly, the only thing that’s been accomplished so far is to ingratiate Eastman with his fellow Republican colleagues who’ve shown they’re more worried about “cancel culture” than seditious activities.